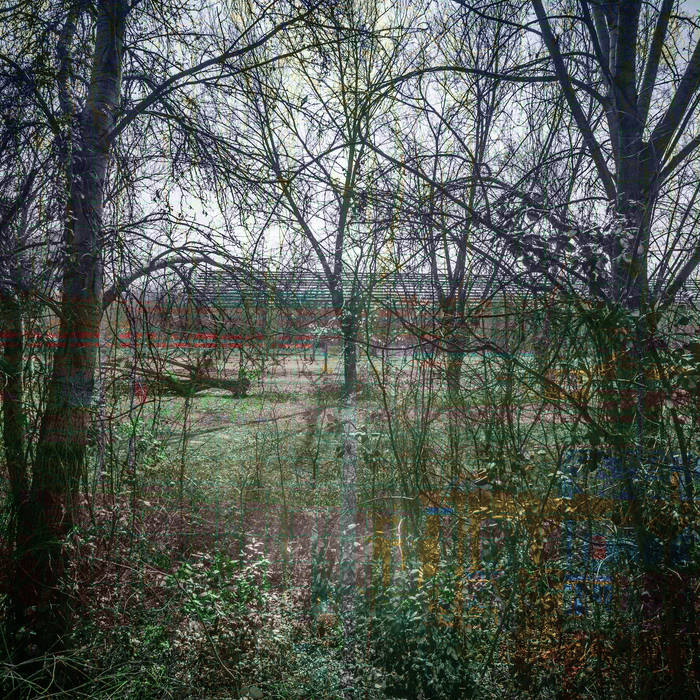 Turning into a side street from a Bologna busy thoroughfare and walking along Via del Chiù, a 116-acre wildwood known as ‘Prati di Caprara’ stretches North for less than a mile.  Entering the forest, the traffic noise lowers slowly; the space transforms into a complex and hybrid soundscape – a natural sound of secluded woods on the West and machine-made vibrations coming from a railway junction on the East.   Prati di Caprara’s wood was part of an extensive military area that laid unused from 1990s; time and a spontaneous self-development has given the wood the opportunity to gradually rebuild its rich biodiversity. Today the song of numerous breeds of birds echoes in the landscape during the day. Such a landscape is most of the time empty of any human physical presence so that the whole atmosphere becomes at times almost ghostly like in a De Chirico’s first-period painting, where the restlessness of space crosses the border between real and surreal.   Sound elements have been running wild for twenty years almost untouched by urban and industrial intrusion. Prati di Caprara’s wood is a sort of island of natural redemption where different community voices meet: the ‘Canaletta Ghisiliera’ that runs along Via del Chiù\Ravone Torrent cycle route (this small canal used to feed a late 15th Century mill in use until 1990s); a wall a few hundred meters long covered with graffiti on which the echoes of the forest are impressed; the high railing bordering that separates unused trains’ warehouses; large tanks for train coach washing; someone who goes jogging and the rare encounter with a few bikes; a sinister-looking passer-by, a marginalised Gypsy community who periodically inhabits the forest living in the crumbling structures of deserted military barracks from which the community has been repeatedly evacuated by the council; the whistle of trains that moves away slicing the air, the roar of an airplane in the deep sky or the rumble of a helicopter in the nearby hospital; the sound of rustling leaves when a breeze blows in the afternoon.   Anticronie is an archive of Prati di Caprara’s sound mapping that has been accurately created to remember and share the atmosphere of a place that, although neglected and abandoned for many years, has kept its inner peace and is still capable to transmit calmness to those who discover it. This is a place suspended between a declining industrial world and the evolution of nature into a third landscape.
The four tracks contained in the work move on a series of ambient-soundscape digressions that stress the potentiality of the third landscape intrinsic to the place. Sound comments and interactive performances with materials and found objects have been recorded in situ and later edited on a digital software so as to give shape to a report, or perhaps a travel diary, of my personal memories and feelings experienced during my time there.
My research has been developed in about 2 years during which the Prati di Caprara’s project has taken several forms and has changed with the passing of the seasons.
After the abandonment in the 1990s, the area was hoped to become a local green lung as the surroundings are currently lacking of parks and green areas, also a high level of pollution due to nearby busy roads has been a concern for the local community. Recently, there has been a shift in the council political strategy; by giving the area to international capital investors for residential and commercial ‘re-development’, the council hopes to create a food and wine centre that will encourage mass tourism and consumption. If that would be the case, Prati di Caprara is seriously under threat.

all tracks composed and mixed by Adriano Sorbello